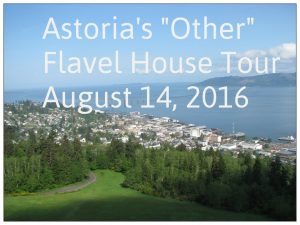 History and architecture buffs take note – Astoria’s ‘Other’ Flavel  House will be open for a tour on Sunday, August  14, 2016, from 10:00 am until 4:00 pm.  In contrast to the well-known  Flavel House Museum, the ‘Other’ Captain George Flavel Home on 15th Street had fallen into disrepair during the past 25 years when it stood vacant.  The new owner, Greg Newenhof, has begun restoring it to its original stately elegance after the long years of neglect, and you can view his progress.

The mansion, on the National Register of Historic Places, was built in 1901 by Captain Flavel and is an important piece of Astoria’s history. The Captain’s son, Harry Flavel, inherited the home, and lived there with his wife, son, and daughter. Legends about the reclusive son, known for his erratic actions, still haunt the home. Nicknamed ‘Hatchet Harry’ because in a fit of anger, he once chopped up the mansion’s wooden banister with a hatchet, he was convicted of stabbing a passerby in 1983. When he exhausted all appeals in 1990, he abandoned his home, becoming a fugitive from justice. After Harry’s death years later, black mourning bunting is said to have appeared mysteriously on the balcony of the abandoned mansion.

The Clatsop County Historical Society will present this special tour with sponsorship by the City Lumber Company. It is the public’s first chance to view the past year’s progress in the mansion’s interior, although it will be years before the grand lady’s transformation is complete. Tickets may be purchased in advance at the Flavel House Museum’s Carriage House Visitor Center, 714 Exchange Street, Astoria, OR.

Don’t miss your chance to visit Astoria the weekend of August 13-14, 2016, your only chance to tour the ‘Other’ Flavel House, plus enjoy the Astoria Regatta and the Celebration of the 50th Anniversary of the Astoria-Megler Bridge. Make your reservations now for your stay at Clementine’s Bed and Breakfast, and you’ll be close to Regatta events, and  just a 10 minute walk from the ‘Other’ Flavel House.