The National Park Service celebrates its centennial August 25, 2016, and the Lewis and Clark National Historic Park invites everyone to the party with free admission to the Park August 25-28, September 24, and November 11, 2016. You’ll travel back another century beyond the 1916’s centennial when you visit Fort Clatsop in the Park, back to the winter of 1805-6 when the Lewis and Clark Expedition reached the Pacific Ocean that December. The men quickly built Fort Clatsop by the Columbia River as their winter encampment before returning East in the spring.  The successful Expedition, charged to study Indian tribes, botany, geology Western terrain and wildlife, marked a turning point in the history of the United States. 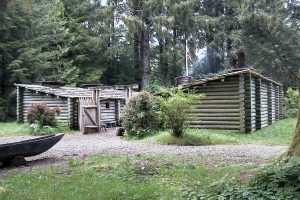 At the Visitor’s Center you’ll learn about the background and details of the Lewis and Clark Expedition, and how they survived their winter on the Pacific coast.  You’ll also learn about the Native American tribes living in the area and their history.  From the Visitor’s Center, take the short walk to the fort itself, recreated according to the original plans. Park Rangers in period buckskin costumes will tell you about the fort, and demonstrate skills essential to the Expedition, such as lighting a fire with flint or firing a gun.

Ever wonder how Fort Clatsop got its name? The Clatsop are a small tribe of Chinookan-speaking Native Americans in the Pacific Northwest of the United States. In the early 19th century they inhabited an area of the northwestern coast of present-day Oregon from the mouth of the Columbia River south to Tillamook Head, Oregon. (source: Wikipedia)

History buffs, don’t miss this opportunity to travel back to the days of Lewis and Clark and experience the challenges they faced. Reserve your stay at Clementine’s Bed and Breakfast, just a short 10 minute drive from the Park, and when you return from your visit in the 19th century to the 21st, you’ll be in the heart of historic Astoria, with its shops, restaurants, and waterfront.