Imagine Astoria’s waterfront without the Astoria-Megler Bridge. That’s what you would have seen 50 years ago while you waited to take the half-hour ferry ride across the river to Washington state. If the weather was bad, you couldn’t even take the ferry! That’s why everyone celebrated the construction of the longest continuous truss bridge in North America, and is celebrating it’s 50th anniversary today.  The four-mile-long bridge, one lane in each direction, spans the Columbia River from Astoria to Point Ellice at Megler, WA. 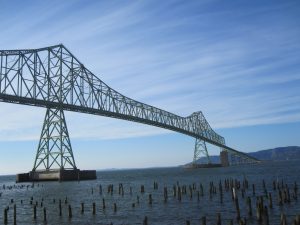 Over 30,000 people watched Governors Mark Hatfield of Oregon and Dan Evans of Washington cut the ceremonial ribbon on August 27, 1966. This ambitious project cost $24 million in 1966, the equivalent of $175 million today. Over 7,000 vehicles cross the bridge each day – can you imagine how many ferry trips that would be? Bad weather isn’t a problem now – the bridge was built to withstand 150 mph wind gusts and a river water speed of 9 mph to tame the “Graveyard of the Pacific”.

Help celebrate the birthday of this final segment of U.S. 101 between Olympia, WA, and Los Angeles, CA. on your visit to Astoria this summer. Be sure to cross the bridge and visit the special exhibit  “Memories of Megler” at the Columbia Pacific Heritage Museum. It’s just a scenic half-hour drive up U.S. 101 from the bridge to Ilwaco, WA.  Historic photographs and first person memories will take you back in time to see the end of the ferry era and the beginning of contemporary auto travel on U.S. 101.

So don’t miss saying ‘Happy Birthday’ to what once was called “The Bridge to Nowhere’, but this year is celebrated as “The Bridge to Everywhere”. Book your stay at Clementine’s Bed and Breakfast today – the special exhibit closes October 2, 2016.