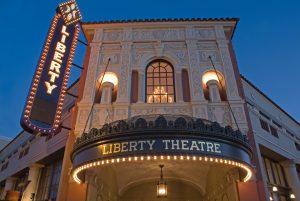 Whether or not you believe spirits may linger in the historic buildings of Astoria, visitors’ thoughts often turn to possible ephemeral inhabitants as Halloween approaches. Since Astoria boasts over two centuries of history, it’s no wonder visitors may learn about ghostly residents who haunt places like the historic Liberty Theatre and the Flavel family’s 19th century mansion.

Although Astoria’s Liberty Theatre hosted entertainers like Duke Ellington, Jack Benny, and Guy Lombardo in the past, it’s the spirit of ‘Handsome Paul’ that many people believe lingers on today. Nattily dressed in white tuxedo and Panama hat for his unending nights out, performers and crews sometimes hear him slamming doors, rattling knobs, or making strange noises. Who knows if it’s his way of applauding or booing the production? What’s a night at the theater without refreshments, so it’s said that sometimes Paul turns on the popcorn machine and soda fountain for a late night snack, and leaves them running for employees to find in the morning. Why not take a virtual tour of Handsome Paul’s haunts on the theatre’s website?

Apparently, spirits of the Flavel family still share their elegant mansion in Astoria with today’s visitors to the Flavel House Museum. Captain George Flavel, a prominent bar pilot and businessman, built the Victorian home in 1884-5, and moved in with his wife Mary Christiana and two adult daughters, Nellie and Katie (Clastop County Historical Society).  In 1934, great-granddaughter Patricia Jean Flavel gave their home to the city of Astoria as a memorial to her family, so perhaps the original occupants feel their ethereal presence is essential. Tales of hauntings in the Flavel House abound. Phantom voices and music may sometimes be heard in the music room, where the talented Nellie and Katie often performed recitals, and the apparition of Captain George Flavel has been reported in his second floor bedroom. Other specters of the family may be sensed in the bedrooms as well – a floral scent, and closed curtains being opened when no one is present.

Whether or not you believe the tales of Liberty Theater’s phantom and the Flavel ancestors, don’t be haunted by postponing your visit to Astoria. A lively welcome always awaits you when you stay at Clementine’s Bed and Breakfast on Exchange Street, in the heart of the National Historic District. You’re less than a block to the Flavel House Museum and only seven blocks from the Liberty Theatre. Haunted or not, both are among Astoria’s best attractions. The Museum is open daily, and for the schedule of events at the Theatre, visit their Facebook page. We’re waiting for your call from ‘beyond’ – Astoria, that is!