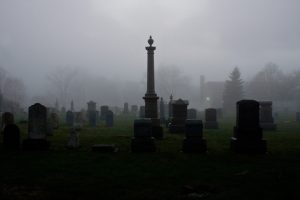 It’s no surprise that some people believe Astoria, the oldest settlement west of the Mississippi River, is the most haunted city in Oregon. Famous for its maritime and military past, spirits are said to wander streets and haunt buildings. Three of the most famous sites are the Flavel House Museum, the Liberty Theater, and the Uppertown Firefighters Museum.

At the Flavel House, the original owners seem never to have moved on, despite their deaths over a century ago. Family specters include Captain Flavel’s presence in his bedroom and his daughters’ phantom voices and music in the music room. The Liberty Theater apparently hosts several spirits – an older woman who haunts the women’s restroom, and ‘Handsome Paul’, who spends his eternal nights enjoying the performances there. Elegantly dressed, performers and crews report he sometimes slams doors, rattles knobs, and even turns on the popcorn machine and soda fountain for a late night snack! The second of Astoria’s two devastating fires, in 1883 and 1922, may be the reason a sleepwalking fireman fell to his death in the 1920s, but still wanders the third floor, continues to stand watch.

The ghosts of the Northwest Oregon Coast aren’t found just in Astoria. Equally well know is the duty-bound young soldier who still patrols Battery Russell at Fort Stevens State Park in Warrenton, and areas nearby. Although the fort was constructed during the Civil War, and spirits from that era could be present, reports of a solider in a 1940s uniform suggest he might still stand patrol for the threat from Japanese ships during World War II. People report having seen him not only on Battery Russell, but as far away as the Promenade in Seaside. When encountered, this soldier simply vanishes into the night!

South of Seaside and north of Cannon Beach, the Tillamook Rock Light operated for 77 years, from 1880 until its decommissioning in 1957. Deaths have surrounded “Terrible Tilly’s” wild ocean landscape since its beginning, when Native Americans in the region warned it was cursed. The first man sent to survey the rock formation died, and only a few weeks before the lighthouse opened, the Lupatia was shipwrecked and bodies of all her crew washed up onto Tillamook Rock. Again in the 1930s, a ship missed the lighthouse and wrecked on the headland, killing all the crew. If these tragedies weren’t enough to cause spirits to linger, the Lighthouse became a columbarium in 1980, and still houses 30 urns of cremains, who have become “honorary lighthouse keepers”. Today, the dead only share the rock, which lies about a mile offshore, with the seabirds who nest there, but you can see the lighthouse from the shore at Ecola State Park, and from Highway 101 near Cannon Beach.

Whether or not you believe these ghostly tales at Halloween, we guarantee a lively welcome awaits you at Clementine’s Bed and Breakfast, in the heart of the Astoria’s National Historic District. Judith, the innkeeper/owner, will greet you warmly on arrival, and the only disappearing acts you may witness are the delicious gourmet breakfasts she sets before all her guests!