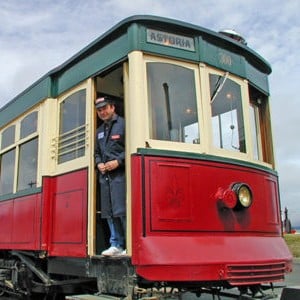 Ride the Astoria Riverfront Trolley to see some of Astoria’s best known historic landmarks on this waterfront tour. Visitors can hear the clang, clang, clang of “Old 300”, a restored 1913 streetcar, throughout the late spring and summer months. The Trolley conductors will tell you about Astoria’s history as you ride along the three mile heritage line. It’s one of the best ways to see many Astoria attractions along the riverfront, and there is a Trolley stop several blocks from Clementine’s Bed and Breakfast.

The round trip on the Trolley lasts about 1 hour, and you’ll hear different stories on the return back through Astoria’s historic district, so be sure to ride the streetcar in both directions. The fare to ride “Old 300” is just $1.00. Even better – the all-day hop on/hop off fare is just $2.00 – one of the best bargains in Astoria!
Here are some of the sites along the waterfront. The Trolley conveniently stops at many of them.
• Historic Uniontown near the western end of the route includes over 100 late 19th and early 20th century examples of Italianate, Queen Anne, Stick Style, and Craftsman architecture.
• Under the Astoria-Megler Bridge, the Trolley stops at the Maritime Memorial Park honoring the region’s seafaring heritage and those lost at sea.
• The Columbia River Viewing Platform in the small park at the 6th Street provides visitors a place to watch ship traffic along the river.
• Around 13th and 14th Streets, the Trolley passes through the part of Astoria destroyed by two great fires in 1883 and 1922.
• Both the Columbia River Maritime Museum and the Heritage Museum are located near the Trolley’s stop at 17th Street.
• After passing the Mill Pond, the Trolley stops near the Uppertown Firefighters Museum with its exhibits of antique firefighting equipment include hand-pulled and horse-drawn vehicles.
The Old 300 website includes detailed information about Astoria’s history along the tracks, as well as the history of Old 300, built in 1913 by the American Car Company of St. Louis.
You can catch a ride on the Trolley at one of nine convenient stops located between Basin Street and 39th Street.  From our B&B on Exchange Street, the closest Trolley stops are at the foot of 6th Street by the Columbia River Viewing Platform, and at 11th Street. Either stop is just a six or seven minute walk from the bed and breakfast. The Trolley schedule is posted at each stop, and its new GPS unit means you can even track the Trolley’s current location with your phone. Best of all, you can just flag down the Trolley anywhere along its route by waving a dollar bill at the conductor!
The historic Astoria Riverfront Trolley operates seasonally, so summer is a perfect time to get on board with a vacation in northwest Oregon. In addition to all the things to do along Columbia River waterfront, you can get Shanghaied in Astoria,  enjoy guided nature walks and ranger programs at the Lewis and Clark National Historic Park , go hiking, biking, canoeing, or kayaking, relax on nearby beaches, explore wildlife sanctuaries, and more. It’s summertime and the vacation living is easy in Astoria, so come join us! Reserve your room at our bed and breakfast by calling 503-325-2005 or going online to the secure website.